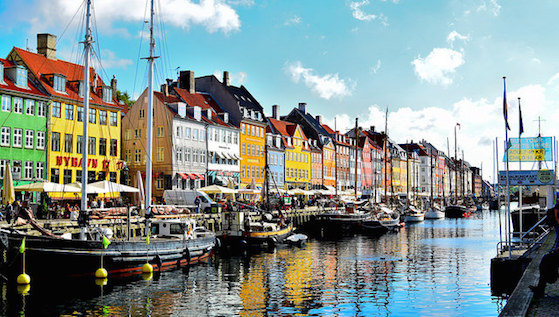 A few weeks ago, we published an article highlighting the importance of urban climate change adaptation in rich countries. Today, we want to draw your attention to how a Danish landscape architecture firm is using design to build climate resilient infrastructure in Copenhagen.

According to the IPCC, Denmark (among other things) will have to deal with more frequent and heavier rainfalls as a consequence of climate change. In recent years, 2011 and 2014, the city experienced two one-hundred-year floods. A risk assessment done as part of the city’s climate change adaptation plan showed that risk of flooding from storm water is already high and will increase every decade until the early 22nd century.

In its adaptation plan, the city of Copenhagen recognises that updates to its sewerage system will need to factor in the increased runoff volume. However, they also decided to build infrastructure that would disconnect rainwater from the sewerage system and thus take pressure off it.

The architecture firm Tredje Natur (“Third Nature”) was founded in 2012 by Flemming Rafn Thomsen and Ole Schrøder. That same year the firm made headlines for presenting their plans for Copenhagen’s first climate adapted neighbourhood in the Saint Kjeld’s quarter. The project uses water and potential runoff volumes as a defining design element, however, it does not so in a restrictive way. The architects tried to use water to create new urban experiences and how urban spaces are used.

One major feature in Saint Kjeld’s is ‘Tåsinge Plads’. At first sight this unassuming square resembles squares in any other city you might care to name. However here there is more than meets the eye. They key to unlocking its secret? Just add water.

It is only during heavy rainfall that its hidden qualities become apparent. Flowerbeds fill with water and become little ponds, upside-down umbrellas collect rain water which can later be used for irrigation, bicycle paths turn into little water channels – basically, the whole urban landscape changes. And it stays like that for a while by delaying water and relieving the sewerage system. These features, which also include large water storage tanks underneath the surface, help keep basements dry.

More recently, Tredje Natur and their project partners, COWI and Platant, also won a competition to transform Copenhagen’s Enghaveparken, a historic neoclassic park in the Vesterbro district that is under conservation treatment.

The goal is, again, to make this park adaptable to storing large amounts of rainwater. Not wanting or being able to change the park’s appearance heavily, the main defining characteristic is the one-meter terrain drop from west to east, which basically shapes the park into a gigantic dustpan.

This allows the architects to direct large amounts of water into the park without major structural changes. A dike, water channels and other features will help direct rain water into the park where it will, similarly to Tåsinge Plads, transform the landscape and create a new experience for visitors as well as relief the sewerage system and surrounding areas from too much rainwater.

These projects show that climate change adaptation can benefit from creative thinking, design, and innovative ideas. In this case, the benefit is also noticeable in financial terms. These ‘green’ and ‘blue’upgrades will not only increase the quality of life but are actually cheaper than focusing all efforts on upgrading ‘grey’ infrastructure (e.g. sewerage).

‘Grey’ upgrades are inevitable due to the lifetime of pipes in general but they can be more effective with systems in place that will take pressure off the sewerage system, thus, reducing flood risk and potential damage.