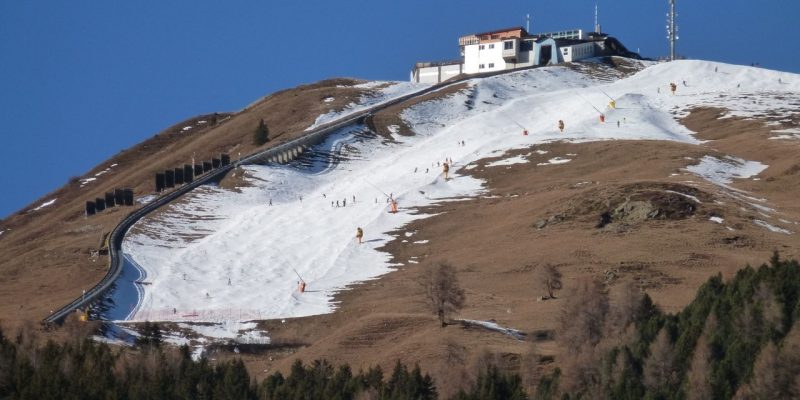 10 April 2017 By Chloe Comments are Off Climate Change, Tourism

The effects of continued global warming on Alpine snow cover could have a devastating impact on Switzerland’s winter sports industry.

Switzerland, one of Europe’s principal winter sports destinations, expects the impact of climate change will leave many of its mountains short of snow cover by the end of the century.

The prospect illustrates the urgent need for climate scientists to be able to develop more detailed forecasting methods that are tailored as much to regional trends as to global ones.

Switzerland couldn’t get enough snow for a time recently, although falls last month mean that parts of the Alps are now covered with fresh powder and are thronged with tourists. But the Swiss side of the Alps had the driest December since record-keeping began over 150 years ago.

A study in the European Geosciences Union journal The Cryosphere suggests that the snow drought will intensify, with bare slopes soon becoming much more common.

The study, by Swiss scientists based at the Institute for Snow and Avalanche Research (SLF) and the CRYOS Laboratory at the École Polytechnique Fédérale, shows that the Alps could lose 70% of their snow cover by 2100. But if global warming is kept below 2°C, only 30% would be lost.

The research also shows that the Alpine winter season, when natural snow is deep enough for winter sports, will shorten.

The ski season could start two weeks to a month later than now. And without a cut in greenhouse gas emissions, enough snow cover for winter sports will by 2100 be assured only at heights above 2,500 metres.

“The Alpine snow cover will recede anyway, but our future emissions will control by how much,” says the lead author, Christoph Marty, an SLF research scientist.

The researchers know that global warming will raise Alpine temperatures significantly, but they are unsure about how it will affect snowfall.

Most of their climate models project slightly increasing winter precipitation towards the end of the century. But the simultaneous temperature increase may mean it falls not as snow, but as rain.

The projections show that the Alpine snow layer will become less deep for all elevations, time periods and emission scenarios.

The researchers write: “The most affected elevation zone for climate change is located below 1,200 metres, where the simulations show almost no continuous snow cover towards the end of the century.”

“The Alpine snow cover will recede anyway,
but our future emissions will control by how much”

The worrying significance of these findings for the winter sports industry is that about a quarter of the ski resorts in the Alps are located below this altitude.

Resorts at higher altitudes could also see drastic reductions in snow depth. If global warming is not kept below 2°C, snow depth could decrease by about 40% by the end of the century, the report says – even for elevations above 3,000 metres.

Shallower snow and a shorter season will affect winter tourism, on which many Alpine villages depend heavily.

But the expected changes will also alter how much water flows into Alpine rivers, affecting downstream irrigation, power supplies and shipping.

Nearly 1,000 miles to the north, there is concern in Norway about the effect that rising temperatures will have on one distinctive area.

Researchers who simulated the history of the Hardangerjøkulen ice cap in southern Norway over the last 4,000 years to see how it had responded to climate change have concluded it is now “exceptionally sensitive” to warming, and its days may be numbered.

Their study, also reported in The Cryosphere, included the mid-Holocene period about 6,000 years ago, when summer temperatures at high northern latitudes were 2-3°C warmer than today. Most, if not all, of Norway’s glaciers melted away during this period.

The researchers were from the Bjerknes Centre for Climate Research at the University of Bergen, and from the Netherlands and the US

Henning Åkesson, a PhD candidate at the Bjerknes Centre, says: “Present day Hardangerjøkulen is in a very vulnerable state, and our study of its history over the last several thousand years shows that the ice cap may change drastically in response to relatively minor changes in climate conditions.”

Every year, winter snow covers a glacier before melting in the summer. At a certain point on the glacier, the competition between snow accumulation and snowmelt is balanced. Glaciologists call this the equilibrium line altitude (ELA), and it is roughly equivalent to the snow line.

What is special with Hardangerjøkulen and similar ice caps, Åkesson says, is their flat topography. At first, the climb is steep, but higher up things get much easier. Much of Hardangerjøkulen’s area is close to the present ELA, so a small change between winter snow and summer melt will affect a very large part of the ice cap.

Åkesson says: “The topography and present climate is such that we soon expect yearly net melt over the entire ice cap. This has already happened a few times in recent years. In the near future we expect this to occur much more often and, with this, the demise of Hardangerjøkulen will accelerate.

“Today, the ice is more than 300 metres thick at places, which may sound like a lot. But the implication of our study is that if climate warming continues, this ice cap may disappear before the end of the century.” – Climate News Network