HomeRelated News The Maldives: Tensions between climate action and tourism

The Maldives: Tensions between climate action and tourism 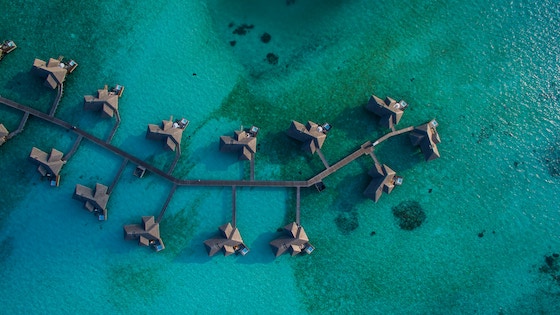 The Maldives are at the front lines of climate change. The nation is comprised of 1,200 coral islands grouped in archipelagos and atolls, and only sits about 2.5 meters above sea level. According to former president Mohamed Nasheed the Maldives are the third most at risk country to sea level rise. Facing a grave future from climate change, Nasheed created plans to make the Maldives carbon neutral by 2020 and urged other nations to follow suit. Nasheed’s successor, current president Abdulla Yameen, has taken a drastically different approach to addressing climate change. Yameen has traded in renewable energy and carbon neutrality, in favor of mass tourism. Yameen and his administration claim that growing the tourism industry would give their country the funds necessary to adapt to the changing climate.

Unlike Nasheed, who famously sought to purchase Indian land so Maldivian people could relocate when the sea levels start to swallow the island, Yameen is determined for his people to remain in the Maldives. Now, the island nation is preparing for rising sea levels with geo-engineering projects to reclaim islands or even construct new islands. These projects are very expensive, so to fund them the government essentially lease out islands, which are then developed into mega-resorts to attract tourists. The money from these leases will also be used to relocate the residents of the leased island.

The islands are usually rented out to foreign investors, which could be companies or governments. In March of 2017, Saudi Arabia leased the Fafuu atoll for 10 billion USD – more than triple the Maldives’s GDP. For many people in the Maldives and around the globe, this deal raised eyebrows and many accused Yameen of selling the atoll. In response, the president issued a statement refuting claims he sold the atoll. Yameen emphasized that foreign-backed development is not out of the ordinary and is focused on delivering positive outcomes for Maldivians.

The Maldives are known for their natural beauty. Luxurious resorts, blue water, white sand, and vibrant reefs make the Maldives a popular destination for tourists looking to relax on the beach and “eco-tourists” hoping to see the pristine marine ecosystems. Yameen’s administration recognizes tourism’s lucrative potential and views it as a means to bring better living conditions to Maldivians as quickly as possible. Since the population is so dispersed throughout the archipelago, it is difficult for the government to provide services, such as water, education, and santitation to everyone. With money from tourism, the administration hopes to relocate and centralize the population to the larger islands so that all citizens can receive government services.

The Saudi’s plan for Fafuu could turn the island into a “Riviera-style super-resort with sea sports, six star hotels, high-end housing and several new airports”. With new developments, the administration hopes to increases tourism from 1.3 million visitors per year to seven million in the next 10 years. A booming tourism industry would increase more investors and provide the Maldives with the funds it needs to adapt to climate change. Additionally, the tourism industry will create thousands of new jobs. Furthermore, resorts could be beneficial for Maldivian reefs. According to Shiham Adam, director of the government’s Marine Research Centre, resorts can act as miniature marine reserves because they are required to protect at least 700m around the island.

While the tourism scheme may seem like the Maldives’s saving grace, many Maldivians are wary of it. Locals fear they will be moved of their islands in favor of resorts. They are concerned the government will relocate them into apartments away from their island life. Environmentalists are concerned about the inevitable increase of carbon emissions as the Maldives develop their tourism industry. The thousands of extra flights to the Maldives will only further increase their emissions.

The administration accepts the reality that developing tourism and carbon-neutrality cannot co-exist, they are still committed to being a low-carbon country. They hope to invest in solar energy and reduce their emissions by 30 percent by 2030. The situation in the Maldives highlights the tension developing countries face between climate adaptation and development. The administration has made it clear that while climate change is a pressing issue, development is their priority. Yameen commented saying the Maldives, “should be afforded the ability to expand our economy to propel more and more Maldivians towards middle income status.”