HomeRelated News Reducing flood risk with the help of ecosystems

Reducing flood risk with the help of ecosystems 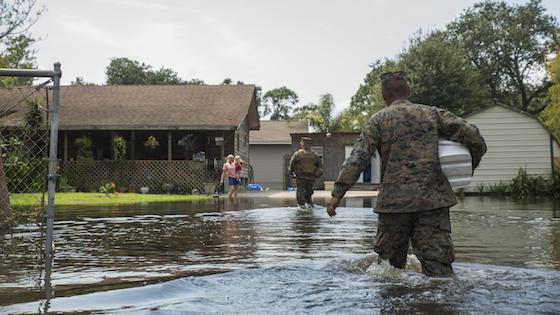 While Houston is still reeling from the impacts of Hurricane Harvey, it appears that one of the city’s main vulnerabilities were its vast impervious surfaces. Concrete, asphalt and various types of surface materials prevent the absorption of water into the soil, and when gallons of rain pour down on urban areas, drainage systems get saturated. Ecosystems could make a substantial contribution to flood risk reduction and enhance urban resilience.

In the case of Hurricane Sandy, a study demonstrated that the presence of marsh wetlands avoided $625 million in direct flood damages across 12 states, as coastal wetlands reduced flood heights. This illustrates that ecosystems can greatly contribute to flood prevention, in particular for low-lying cities. There are different types of ecosystems that can increase cities’ resilience to flooding. However, many of these ecosystems are threatened by human activity, and initiatives are currently being implemented to mainstream their use and strengthen the resilience of low-lying and coastal cities.

Wetlands are diverse and can be found at different locations. For instance, marshes, areas of grassy vegetation and peaty soil, are common in floodplains while tidal wetlands, characterised by reeds, mangroves and mudflats, are located at river mouths. Forested wetlands and ponds are additional wetland types that can absorb large amounts of water runoff and help regulate overland floods. Besides, other forms of ecosystems, such as coral reefs, play an important role in protecting low-lying urban areas. They provide natural barriers against wave energy, an essential aspect to consider when it comes to storm surges and rising sea levels, and act against coastal erosion. Consequently, protecting those ecosystems is essential to leverage the potential flood protection they provide. Wetlands are currently threatened by manmade activities such as new build-up or pasture areas that convert them into non-wetland zones, pollution emanating from untreated wastewater and vegetation clearing. These decrease the wetlands’ capacity to hold back and absorb water.

There currently exist several initiatives that focus on protecting and using those ecosystems against floods. In Bangladesh for example, an initiative funded by the Least Developed Country Fund, focuses on coastal afforestation as a way to increase community resilience. Part of the project is dedicated to planting protective and productive vegetation, including mangroves, to protect communities’ livelihoods from extreme weather events and sea level rise.

The insurance industry is also interested in ecosystems’ capacity to act against flooding. During an event on environmental protection held at the United Nations Office for Disaster Risk Reduction (UNISDR), insurers acknowledged that investments in natural solutions played an important role in risk reduction. Representatives of academia, conservancy institutions and insurers also teamed up to release a study on wetlands’ contribution to reducing floods in the US and included those ecosystems in flood models. Although wetlands are rarely considered in flood risk assessments, the study demonstrated that in high risk areas in New Jersey for instance, “marshes reduce risks to property by as much as 70%” showing the immense impact ecosystems could have on flood risk if managed properly.