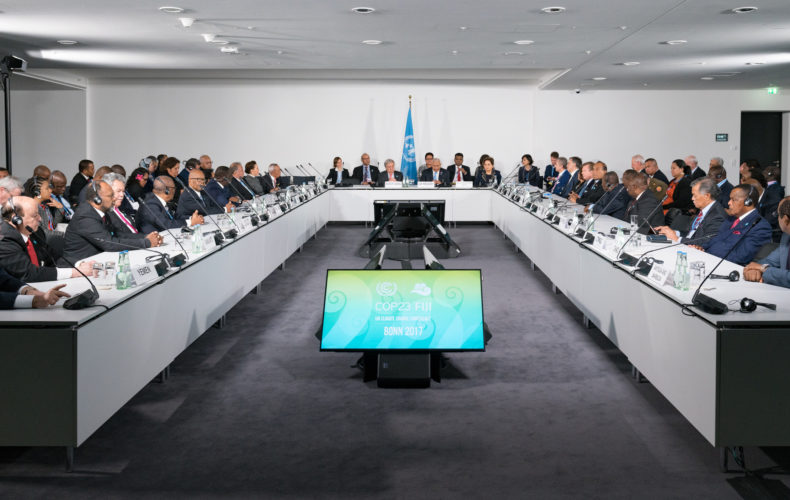 12 December 2017 By Motu Comments are Off Acclimatise, Climate Adaptation, COP23

In the early hours of Saturday morning, the official UN climate talks came to an end. Proceedings closed with a traditional Fijian song, Isa Lei, marking the end of the small island nation’s COP presidency. The negotiations did not close on a spectacular note, as was the case in 2015 when the Paris Agreement was signed, but that does not mean that nothing was achieved in Bonn. What many thought would be an event defined by the current US government’s announcement to step away from the Paris Agreement, turned out a little more positive.

This was the first COP chaired by a small-island state, which provided such nations a platform to highlight their challenges and inform discussions. With a strong focus on social issues, COP23 saw the establishment of the Gender Action Plan, highlighting role of women in climate action and promoting gender equality in the process, and the Local Communities and Indigenous Peoples Platform, which will support the exchange of experience and sharing of best practices on mitigation and adaptation. Fiji also launched the Ocean Pathway Partnership to integrate oceans more into the UNFCCC process.

Progress outside of the formal process

This year, significant progress was made outside of the official COP negotiations. This is important as it clearly signals that climate action is accelerating outside of governmental processes.

COP23 saw the establishment of the US Climate Action Center, an initiative by US American states, cities, a handful of US senators, businesses, colleges and universities, and non-profits who are committed to climate action regardless of the current White House position on climate change. ECO, the COP newsletter by Climate Action Network International said “the delegation represents a country whose people are deeply committed to climate action.”

Current California Governor Jerry Brown and United Nations Secretary-General’s Special Envoy for Cities and Climate Change Mike Bloomberg presented the first report of their initiative ‘America’s Pledge’, which was launched this year in July. The report communicates to the international community the scope and scale of non-federal climate action in the United States following the Trump administration’s decision to withdraw from the Paris Agreement. It clearly shows the amount of public support for climate action in the USA.

More specific to adaptation and climate risk was the launch of the Global Centre of Excellence on Climate Adaptation (GCECA). The centre, which Acclimatise is a founding member of, wants to accelerate climate adaptation by mobilising and convening the global adaptation community to recognize, build and promote excellence among all relevant stakeholder groups around the world.

Furthermore, the European Investment Bank announced it would start screening all of its investments for climate risks using Acclimatise’s Aware tool.

Tensions over pre-2020 action and finance

One area of conflict that emerged in the first week of the talks was the issue of pre-2020 climate action. Developing countries were concerned that rich countries would not meet their commitments they made under the Paris Agreement, for the period to 2020. One of the main issues was the agreed $100 billion per year in climate finance up to 2020, which developed countries have not delivered. While little substantive progress was made on this issue, developing countries succeeded in getting pre-2020 ambitions and implementation included in the COP23 decision text, which states that they are “of utmost importance”. These discussions will also be included in the so-called ‘Talanoa Dialogue’, a one-off process in 2018 to take stock of climate action.

Another issue on climate adaptation finance concerned the Adaptation Fund. There was disagreement over whether the fund, serves the Paris Agreement or not. The fund, was established in 2001 to finance adaptation projects in the developing country Parties to the Kyoto Protocol (the deal struck in 1997 committing developed nations to cut emissions up to 2020). Many argue that for the fund to keep political importance it should serve the newer Paris Agreement. Finally, it was decided that the fund ‘shall’ serve the Paris Agreement, expressing a strong intention but not fully committing to it.

Finally, the Green Climate Fund (GCF) put a strong focus on adaptation during COP23. Following a surge in requests for GCF support, they want to make access to climate adaptation finance easier with a suite of tools including Acclimatise’s GCF proposal toolkit.

Loss and damage – where will the finance come from?

Loss and damage is a historically thorny subject at the UN climate talks, but it was acknowledged in the Paris Agreement and is emerging as “the third pillar of international climate policy”. However, it currently has no sources of finance; an issue that was raised again this year and got postponed to 2019. Within the UNFCCC, loss and damage is dealt with through the Warsaw International Mechanism, which has its next review coming up in 2019. Shifting the discussion to 2019 has been described as “wholly inappropriate” by some experts. Countries agreed to hold further talks, known as the Suva Expert Dialogue, in 2018. The hope is that this will lay the foundations for delivering finance to climate-vulnerable countries where climate-related loss and damage will be most severe.

On a more positive note, the InsuResilience Global Partnership for Climate and Disaster Risk Finance and Insurance Solutions was launched during the second week of COP23. The initiative aims to provide insurance to 400 million poor and vulnerable people by 2020. “The Global Partnership is a practical response to the needs of those who suffer loss because of climate change, and I am very proud that it has happened under Fiji’s Presidency of COP. At the same time, it is a means of preparing for a more resilient form of development for those who will have to adapt to the great challenge of climate change,” said COP23 President and Fijian Prime Minister Frank Bainimarama.

2018 will be an important test for the Paris Agreement, as Parties will have to complete the work on the agreed rulebook and complete the global stocktaking under the Talanoa dialogue. Finally, in October, the IPCC will issue its special 1.5 °C report with the aim of strengthening the global response to climate change. COP24 is set to take place in Katowice, Poland from 3-14 December 2018.